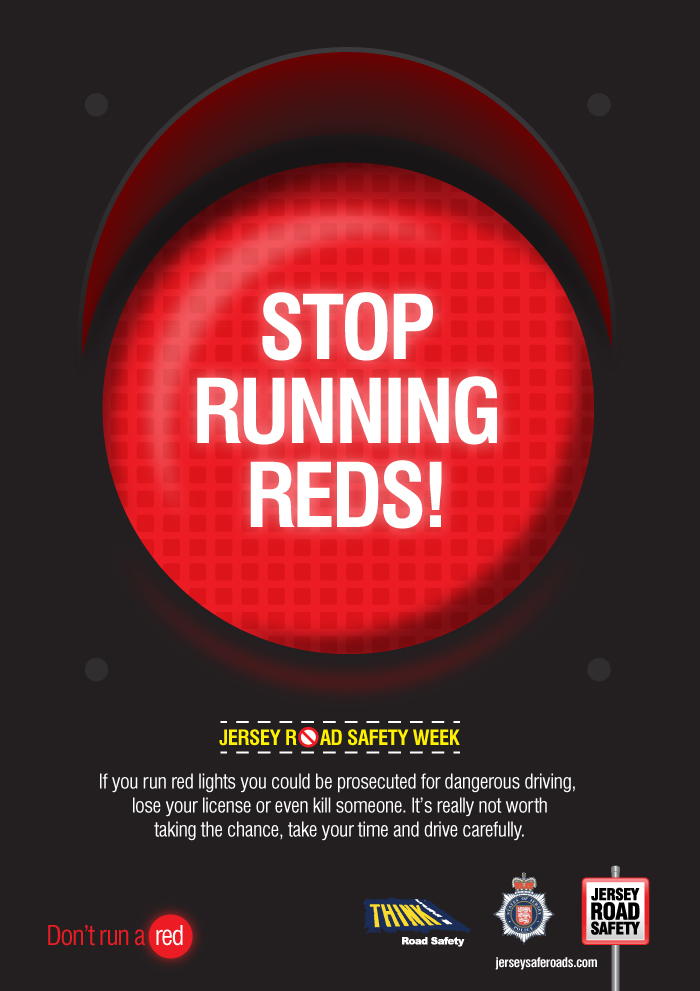 Our focus for Road Safety Week 2015 (23rd to 29th November) is a fairly widespread problem in Jersey, that of people driving and riding through traffic lights that have turned red.

There are several ‘hot spots’, mainly on the ring road around St Helier and there have been a number of collisions resulting from this.

Three people were prosecuted for dangerous driving so far in 2015 and convicted on CCTV evidence while driving through red lights.  This has resulted in driving bans and heavy fines for the drivers concerned, this will also mean they will have to re-sit their driving test again.  This is the practical test as well as theory and the new hazard perception test.

184 people were prosecuted during 2014 for failing to conform to traffic signals and 145 so the end of September this year.

What does the Amber light mean?

The Highway Code says “AMBER means ‘Stop’ at the stop line.  You may go on only if the AMBER appears after you have crossed the stop line or are so close to it that to pull up might cause an accident

It’s not just vehicles that are affected

Our Chairman, Tim Parker-Garner rides a moped and feels great pressure from vehicles behind him as he approaches lights that are in the process of changing.  Here are his thoughts,

I have been driving for well over 40 years and have witnessed all kinds of driving on both sides of the road. As a rally driver I learned may years ago to expect the unexpected, something I do not believe many drivers out there do. My mother advised me many many years ago to drive as if I was coming the other way. A piece of advice that I have adhered to, as much as possible, and one which most drivers should consider.

In the past 15 years or so I have taken to commuting to Town on a 50cc scooter. Not a big machine for a little fellow like me, but one which provides me with a superb platform to watch the antics of my fellow road users. Many motorists take note of us scooterists and pull over to let us past and take out some of the peril of our journeys. Sadly some do not and I feel would rather run us off the road than give us room and dare I say respect. In this instance I feel a camaraderie with push bike riders. One place though it is obvious that Jersey drivers drive without much thought to their fellow road users is at traffic lights. These are usually at junctions and whilst here we only have an Amber light when the lights are going to the Red or stop position most motorists are not too sure what to do when they see an Amber light so often speed up and try to cross the junction before the Red light shows. In the UK there is an Amber before the Green or go light, but for this article we will ignore that. I travel the Inner Road from Bel Royal to Town and so pass through several sets of lights, at most everyone behave, but when one gets to West Park and we merge onto the Avenue it becomes obvious that the vehicles coming in from the West are usually in such a rush that they have to get over those lights at all costs and many is the time that the Red light is ignored. As a scooter rider I find this kind of frightening as I may be slowing for an Amber light, prepared for it to turn Red, but is the guy behind? Is he going to “tailgate” me?

We motorists today have in most cases grown up with the motor vehicle and driving is almost second nature, but as a motorist we have a duty of care to all our fellow road users whether they are in cars, on bikes or bicycles, riding horses or walking so we must be alert at all times and expect the unexpected. Green lights are going to go Red in due course, that Green light is not signalling the start of a grand prix, but warning of a light controlled junction and needs respect. If it is so important that you are not held up by a changing light then leave earlier and have more time for your journey. An unrushed journey is much less stressful and can be a pleasant experience, try it some time and don’t become a Red Runner, especially if your licence is important to you. Yes the Police are going to toughen up on Red Runners and licences could be at stake…